Query Letter Sample – How to Write an Agent Query 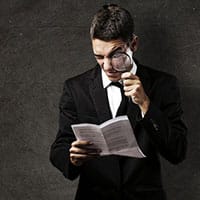 Sample Query Letter – The query letter sample below will help you create a successful query letter of your own, so you can get a top literary agent, publisher, and book deal. This article explains. It’s part of our free 15-part guidelines on How to Write a Query Letter by Mark Malatesta, a former literary agent and former Marketing & Licensing Manager of a well-known book publisher.

This part of the guidelines shares
and discusses a sample query letter.

As an author you might wonder
how important your query letter is.

The sample query letter below (by a previously unpublished author) didn’t just get my attention when I was an agent. It made me request the complete manuscript to read. It was included in the Writer’s Digest Books Guide to Literary Agents as a sample query letter for other authors to learn from.

It completely changed
the author’s life.

The sample query letter below led to:

What is a query letter
you ask?

You can credit everything that happened above to the sample query letter below (although the author gives me a lot of credit too, since I’m the literary agent that secured her first seven book deals).

Of all the agents listed in Jeff Herman’s Guide to Book Publishers, Editors, and Literary Agents, you seemed the nicest! (Or maybe it’s just one of the other entries I saw. “Impatient, illiterate, ignorant writers I do not allow… Remember, I’m selective and cranky!” Gee, I think I’ll sign right up.)

Several reasons I feel I have a winning YA in The Body of Christopher Creed:

My full-time position is Director of Publications for the Miss America Scholarship Foundation. I write all their publications, ghost write for Miss America, have written Miss America preliminary stage scripts. I have sold two plays, and The Body of Christopher Creed is my fifth young adult novel (I’ve hit VERY close). I have been a spokesperson for the smuggling of black market literature into former communist countries. I would love to speak at high schools and have a good background in marketing, but the best thing that qualifies me to write for this age group is that I’ve never quite grown up. I can clip Miss America’s manager in the #@! with a rubber band from 30 feet, can gargle the entire national anthem and not choke, and would still be winning belching contests against my daughter’s compatriots if she weren’t threatening constantly to disown me (she’s coming of age, so).

Always address your query to an individual agent–don’t say “Dear Agent.” When it comes to compliments, they don’t guarantee you’ll get an offer for representation. But they can’t hurt, either, if your praise is specific and genuine. And don’t be afraid to have a sense of humor (if you have one, don’t force it).

You probably noticed that this sample query letter uses an unconventional format. Carol used bullet points. That’s okay because content matters most. Who cares what a query looks like if it communicates the right things. Very few authors convey a deep understanding of their target market. If you put that much thought into your pitch letter, literary agents will assume you put just as much thought into the actual writing of your book.

If you’re not extremely knowledgeable about your genre, however, don’t get too discouraged. Instead, talk to your local bookseller or librarian about your book. Briefly explain your situation and ask questions to help you better understand your target market and how your book is unique.

When sharing what I call the “competitive advantages” of your book,
always try to do these three things:

Read this paragraph of the sample query letter (above) one more time
and you’ll see that Carol does all three of these things well.

In this paragraph of the sample query letter, Carol continues to reveal her knowledge and mastery of the YA book genre. She then starts mentioning names of bestselling authors, to help literary agents understand what her writing style is like; she does it without saying she’s better than (or as good as) those authors.

Take a quick look at the sample query letter one more time and see if you can figure out what her book is actually about. I love this part. Carol says absolutely nothing about the plot of her book. My point? Don’t go on forever about your story because it’s the easiest thing for you to do. Include at least one paragraph that puts your book “in context.” The purpose of a query isn’t just to tell literary agents what your book is about, you also need to make agents trust that you know your genre and market.

Did you notice, in this section of the query letter sample, that Carol told me she was an unpublished novelist? She also stated (very wisely, in my opinion) that she’d written five novels and already come close to getting published. Most authors think talking about past “failures” will make literary agents trust you less. It made me trust Carol more–I suddenly knew she’d paid her dues and was committed, and she’d probably gotten better with each book. If I didn’t ask to read her manuscript, someone else would. And I might regret letting the next big thing get away.

The closing of this sample query letter is well-done also. Genius, in fact. That’s because teenagers don’t do boring. So Carol was clever to use her real voice for her query–the same voice that I was pretty sure I’d see later in her novel. I could also tell (as you probably could), from Carol’s personality in this sample query letter, that she would be popular with younger readers when speaking and doing appearances. So, don’t be rigid. “Professional” doesn’t mean boring. You can be good at what you do, make a case for why it’s valuable, and have fun at the same time.

Now that you’re seen my favorite sample query letter
read the next article in this free 15-part series with
my thoughts on Query Letter vs Synopsis.